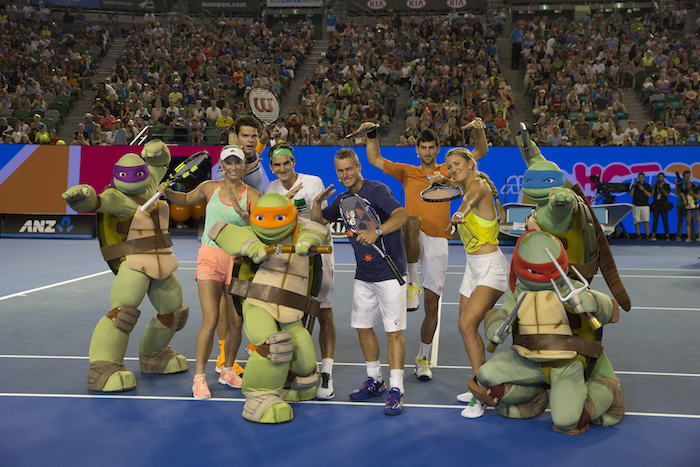 The Ninja-themed event, hosted by Nickelodeon’s Rahart Adams, was a culmination of ballkids, dancers, acrobats, Teenage Mutant Ninja Turtles and the world’s best tennis players. Ahead of his 20th Australian Open campaign, Lleyton Hewitt flexed his super skills when he played against four young players from the audience, showcasing exactly what Kids Tennis Day was about.

“Kids Tennis Day is about engaging, introducing and educating the next generation about tennis and the Australian Open in a fun, relaxed way,” Hewitt said.

“I was fortunate enough to be involved in the game at a young age, receiving coaching, playing at a club and visiting the Australian Open every year.

“I made a point of spending time around the practice courts watching the big names go about their business. It was fun and enjoyable and that is the best way for parents to approach their children playing, by making sure they enjoy themselves as it will help them to learn easily.”

From Monday, 18 January, families will be able to enjoy the free kids’ playground “Kids’ World” as part of the Australian Open Festival at Birrarung Marr. The playground will include giant Nickelodeon inflatable playgrounds, meet and greets with characters such as SpongeBob SquarePants and Nickelodeon’s signature slime at the world famous Slime Lab.

Linkedin
Twitter
Facebook
Email
Previous articleThe Cost of a Gaming Experience 2.0: Is Apple TV a Viable Gaming Device?
Next articleWide Eyes News from the Tube — The TV Industry in Australia