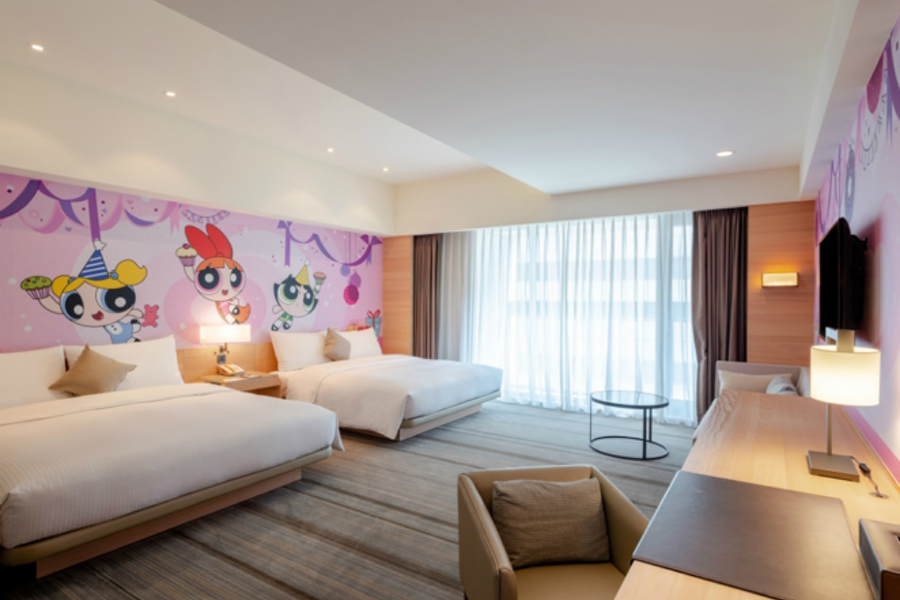 The branded experience begins at the entrance, where there is an eye-opening 3.5-metre-tall sculpture of Finn and Jake from Adventure Time. Never seen before in Taiwan, the theming continues in 54 rooms, in the Cartoon Network Party Café, at the hotel’s indoor recreation area and outdoor Funky Field playground.

“Together with millions of Cartoon Network fans across this region, including here in Taiwan, we are thrilled to be partnering with Cathay Hospitality Management to create the very first Cartoon Network-themed family accommodation experience in Asia. HOTEL COZZI is a unique concept that will delight the many fans who love our hugely popular franchises The Powerpuff Girls, We Bare Bears and Adventure Time. Guests will be able to relax, eat and play surrounded by their favourite shows and characters,” said Vikram Sharma, Vice President of Cartoon Network Enterprises – Asia Pacific.

Since its opening in 2015, HOTEL COZZI Ximen Tainan has become the go-to establishment for independent travellers. The vast 1,650-square-metre outdoor Funky Field playground, convenient location and attentive service are some of its key draws for families with children. Together with Cartoon Network, the hotel has added a local touch to its corridor walls by integrating cartoon characters into scenes of Tainan’s historical Shennong Old Street. These specially customized wall designs are exclusive to Taiwan and are the perfect backdrop for family selfies and wefies.

As a family-friendly establishment, HOTEL COZZI Ximen Tainan is known for its indoor and outdoor leisure facilities. In the rebranding, one entire floor has been converted to a new indoor recreation area with two main zones. “Adventure Time Candy Kingdom”, is filled with fun attractions such as a Bubble Ball Pit, Candy Library and Bubblegum Game Wall. In “We Bare Bears Fun Land,” guests arrive at a farmers’ market to have an awesome time with Grizzly, Panda and Ice Bear.

The hotel’s signature Funky Field playground blends Cartoon Network elements to up its fun levels. Every attraction is now a photo spot. Build a sand castle with Blossom, Bubbles and Buttercup at “The Powerpuff Girls Sandbox”, ride on the COZZI mini train and greet Grizzly, Panda and Ice Bear at “We Bare Bears Station”, and drop by the “Adventure Time Playhouse” to enjoy to a music concert held by Finn, Jake, Princess Bubblegum, Ice King and Marceline the Vampire Queen.