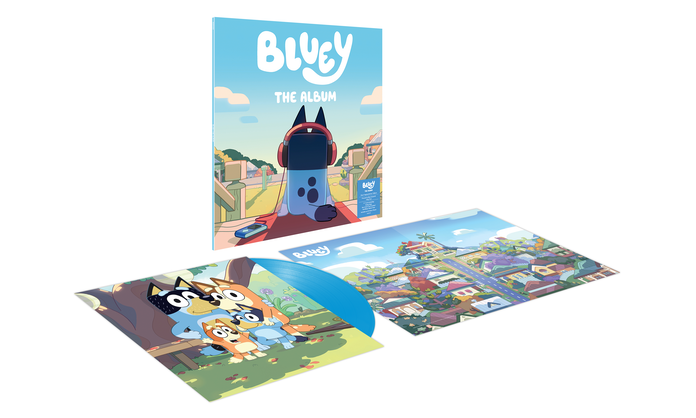 A new Bluey: The Album vinyl record is now available for pre-order in Australia, coinciding with the global digital release of the album.

The album will be available to stream and download worldwide for the first time from 1 October and will be released on CD and blue vinyl in the UK, NZ and the Americas; having already been released on CD and streaming services in Australia and the US, earlier this year.

It debuted at #1 in the Australian ARIA chart — the first children’s album ever to take the top spot. It hit #1 in the U.S. Billboard Kids Album Chart based on streaming and a limited-edition vinyl release for Record Store Day in Australia sold out.

Bluey: The Album features 17 tracks, all original compositions from series one of the smash-hit family animation. Highlights include music from fan-favourite episodes including Keepy Uppy, Here Come the Grannies!, Pool and The Creek.

The music for the series is instantly recognisable to parents everywhere. Composer Joff Bush incorporates classical themes throughout the soundtrack and tracks on the album also move between ska and folk. All compositions have been reworked into full tracks for the album including I Know a Place (The Creek Song) which features vocals from Helena Czajka and Jazz D’Arcy on the album version.

Bluey has won the hearts of kids and parents around the world since it first launched in Australia in October 2018, and the show is fast becoming a global hit.

In Australia, Bluey was the #1 children’s programme on metro broadcast television in 2020 and is the #1 series ever on ABC iview with over 480 million views across series one and two since its launch*. In the UK, it was the most viewed show on CBeebies in June** and is also available on Disney+. In the U.S., across Disney Junior and Disney Channel in Q2 2021, the show was the #1 most watched TV series with kids ages 2-5.*** Bluey has also won multiple awards, such as the International Emmy® Kids Award in the prestigious Preschool Category in 2020, and its second AACTA Awards for Best Children’s Program that same year. The accolades continue in 2021, with Bluey winning four Kidscreen Awards in February.

The series follows Bluey, a six year-old Blue Heeler dog, who loves to play and turns everyday family life into extraordinary adventures. Bluey is produced by multi-Emmy® award-winning Ludo Studio for ABC Kids Australia, co-commissioned by ABC Children’s and BBC Studios, and distributed internationally by BBC Studios outside of Australia.