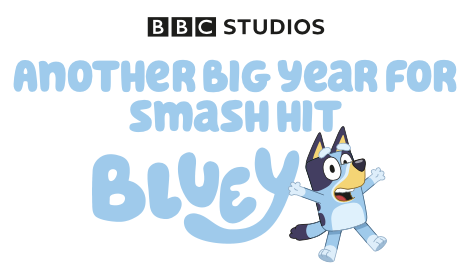 Home-grown animated series Bluey continues to win hearts across Australia and the world. A smash hit with families, Bluey has been widely praised for its joyous yet honest portrayal of young family life. In the last 12 months it has become one of Australia’s most popular children’s brands with BBC Studios securing a number of major deals and partnerships. The highly- anticipated launch of Bluey products at the end of 2019 highlighted the brand’s growing popularity in Australia. With products slated for 2020 and beyond, expect more exciting news from Australia’s favourite Heeler family.

Bluey follows the adventures of a loveable, inexhaustible six-year old Blue Heeler dog who loves to play and turn everyday life into extraordinary adventures. Since launching in October 2018 on ABC KIDS, the series has gone from strength to strength; it was the number one children’s series of 2019 on broadcast television in Australia* and is the most watched program in ABC iview’s history, with over 170 million views**. The series also picked up a Logie Award for ‘Most Outstanding Children’s Program’ and an AACTA Award for ‘Best Children’s Program’.

Bluey went global in 2019, securing a global distribution deal with Disney, which saw the series premiere internationally on Disney Junior. In early 2020, the series launched on streaming service Disney+ in US and Canada, and will soon become available in all territories outside of Australia, New Zealand and Greater China. The series is also nominated for an International Emmy® Kids Award, highlighting the universal appeal of the distinctively Australian series.

It was also a big year for licensing with BBC Studios announcing a publishing deal with Penguin Random House ANZ and a global toy deal with Moose Toys. The highly-anticipated launch of Bluey toys and books in November sent fans into a frenzy. Both toys and books were listed among the top Christmas gifts for children by numerous media outlets and Bluey books consistently took the top three spots in the weekly Australian Book Charts. In only a few months, approximately 150,000 plush toys and over 400,000 books have been sold.

BBC Studios also partnered with iconic Australian brand, Bonds for Bluey’s first apparel range. The Bonds x Bluey collaboration launched in January and included an adorable range of infant and kids clothing. It proved to be a winning combination with the range selling out within a couple of weeks. Following the success of Bonds x Bluey range, BBC Studios is thrilled to be working with licensee Designworks to bring more Bluey apparel to fans, available across major retailers including Target, BIG W and Kmart from early March.

DVDs also proved to be popular among fans. After launching in October, the first two volumes of Bluey DVDs were Universal Sony’s highest performing family titles for 2019. Impact Posters also reported Bluey was the top-selling poster on release across BIG W, Target and other retailers. More DVDs and posters will be released in 2020.

Following the success of the first three Bluey books, fans can add to their collection with more books hitting shelves in 2020. Just in time for Easter, Bluey: Bob Bilby and Bluey: Easter Fun, will be available across Australian book stores from early March, with two more exciting books – Bluey: Big Backyard and Bluey: The Creek – set to be published in the coming months.

Moose Toys delighted the fans with the release of Jumbo Best Mate Bingo plush in January and two card games (Bingo’s Bingo Game and 5 in 1 Game Set) in February. In the coming months look out for more adorable plush toys and fun ranges of Bluey– inspired playsets and games hitting Australian stores, including the Bluey Shadowlands Board Game, based on the fun adventures of Bluey and her friends. The ever-changing and unpredictable game will keep kids entertained for hours. 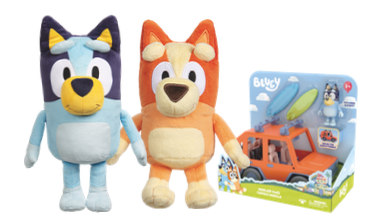 Also guaranteed to be at the top of any fans’ wish list is the Heeler 4WD – the perfect car to go on family adventures, like a trip to the beach. The Heeler 4WD comes with 2 surfboards that are compatible with all Bluey figures. Kids will love to recreate some of the most memorable moments from the show with these adorable toys.

BBC Studios is delighted to work with more partners in 2020. Keep an eye out for personalised products (Stuck On You), footwear and bedding (Caprice), stationery, arts and crafts products (Hunter Leisure), lunchware (Zak), seasonal confectionery (Kinnerton) and puzzles (MJM). This Easter will also see the debut of Bluey-licensed showbags with partner Bensons.

Fans can also look forward to the second series premiering on ABC KIDS and iview this year. The Heeler family are also hitting the road with Bluey’s first live show, Bluey’s Big Play, touring to over 50 theatres across Australia, starting in May 2020. Bluey and Bingo costume characters are also popping up around the country thrilling fans with the chance to meet their favourite heeler pups. It’s shaping up to be another incredible year for Bluey!