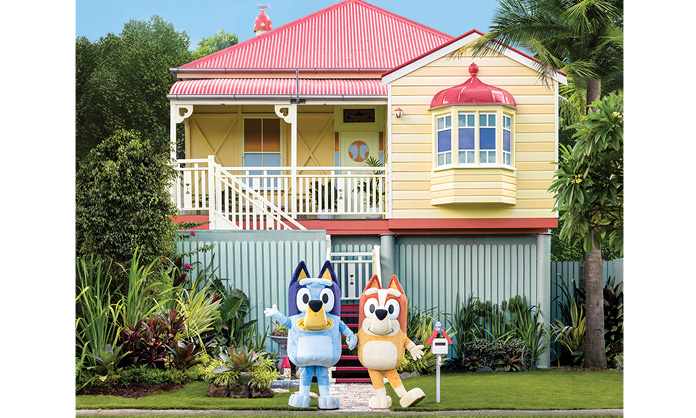 She’s the adorable Blue Heeler from Queensland who’s captured the hearts of millions, and with a growing list of successes spanning the globe — from major partnerships, to colourful activations, to new series launches — Bluey is in for another big year.

For anyone who has been living under a rock since it launched in 2018, Bluey is the homegrown, Emmy award-winning, animated series that follows six-year-old Bluey, her family and her friends as she turns everyday life into extraordinary — and often hilarious — adventures.

The third series premiered in Australia in November 2021 to widespread acclaim and Bluey remains the number-one kids’ show in Australia across all age groups. Locally it’s won an ARIA, AACTAs, and the ATA Preschool License of the Year award two years running. Live stage show Bluey’s Big Play also enjoyed an incredibly successful run, selling out in theatres across Australia.

Overseas, Bluey screens in more than 60 countries, and on top of its Emmy, has garnered a suite of international awards, five-star reviews and a fanbase that includes Hollywood A-listers like Eva Mendes and Natalie Portman (who have also voiced characters on the show!).

One of the forces behind the might of the Bluey brand is BBC Studios, the creative powerhouse that heads up the show’s global distribution and licensing, and bolsters the brand with its 100 years of BBC experience and reputation for top-notch content. Here we take a look at five of the biggest projects BBC Studios has in the works with Bluey right now, with plenty more to come:

Fans around the world were gobsmacked when they saw the Heeler home “for real life” thanks to BBC Studios teaming up with Airbnb on their wildly successful “Only On” programme. Instantly recognisable features from the show like the bone-shaped chimney, Chattermax, garden gnomes and watermelon rug were lovingly recreated in painstaking detail to bring the iconic home to life. One lucky family were then able to book for a weekend — which included an afternoon of Duck Cake decorating, and a tour of Ludo Studio. The team also created an interactive “Jam and Dance” online experience with a Bluey composer and Brisbane choreographer. BBC Studios’ Head of Brands and Licensing, Kate O’Connor, says this one was all about giving back to the fans. “We were blown away by the reaction. The fans were so excited to see Bluey’s house in 3D and it’s really opened our eyes to how popular a permanent ‘for real life’ attraction would be.”

In its 140+ year history, Colgate has never partnered with an Australian brand – until now. Bluey manual and power toothbrushes, and toothpaste in fully recyclable tubes hit the shelves In Australia from March. For Kate and the Bluey team, it was a major coup: “Partnering with a global name like Colgate just goes to show the strength and reach of the brand — we’re very proud of this Aussie first.”

With calcium-rich custard and yoghurt products already on shelves, Pauls have added another Bluey product to its range — new Banana Custard, which hit supermarkets in March. “Pauls dairy ticks the all-important healthiness and flavour boxes, which are vital for Bluey food products. We’re excited to explore even more options in the FMCG space,” says Kate.

With the show now screening on almost every continent, spurred by a BBC Studios-brokered deal with Disney, Bluey products are in increasingly high demand internationally. Cue some major deals with big hitters like Crayola and VTech. Crayola products are on track to hit shelves from April; first up will be Color and Sticker, Giant Coloring Pages and Color Wonder. VTech’s initial lines will include an electronic book, role-play watches and a play phone, with product expected to launch in Australia and USA near the end of 2022, followed by future roll outs in the UK, France, Canada and New Zealand. “It’s further testament to Bluey’s universal popularity that we’re able to forge these partnerships with major global players,” says Kate. “We strive to partner with brands that are a natural fit, like Crayola — anyone who watches the show knows Bluey and Bingo love to draw!”

Dancing BlueyOne of the hot new big-ticket items for Bluey in 2022 will be Moose’s Dance and Play Bluey — set for release in August. For the first time, Bluey will come to life in an interactive way, with three different activities: talking, singing and dancing. Aimed at three-to-five year-olds, Bluey says 55+ phrases, stands on one leg and dances up a storm in “Dancemode”, sings four songs, and even plays games — including “Statues”, when a key word makes everyone freeze in their place.

2022 has already been a wild ride for Bluey, and with further exciting announcements to come, and the second set of Series 3 launching later in the year — featuring more iconic characters, Aussie scenes and guest voices — Bluey’s big year is set to deliver even more big surprises… So watch this space!

This article originally appeared in The Bugg Report Magazine Edition 40