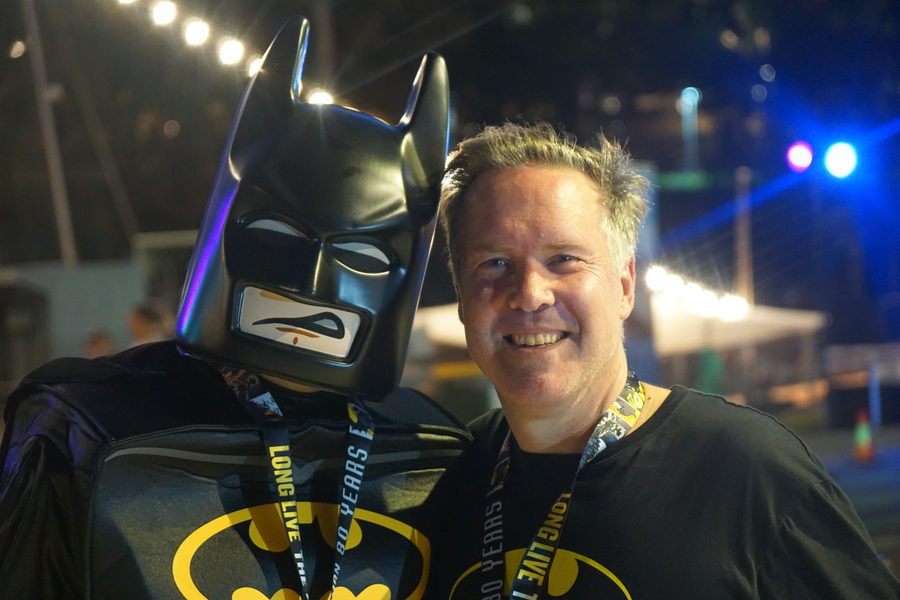 DC FanDome is the place to hear highly anticipated announcements and the latest news, see exclusive footage, and venture into themed worlds designed to entertain everyone from movie and TV superfans to gamers and readers, to families and kids. After a hugely successful first event in August, DC FanDome returns this weekend to give fans even more to talk about!

The Bugg Report had the chance to speak to Andrew Bromell, Executive Director at Warner Bros. Consumer Products Australia & New Zealand, about all things DC FanDome in-time for the launch of the second event on September 12th.

Andrew, I am sure nobody has missed it but can you give us an overall update and insight into DC FanDome?

The idea for DC FanDome first sparked in April, soon after most of the world had effectively shut down amid the COVID-19 pandemic. With the cancellation of San Diego Comic-Con in particular, the Studio knew that the traditional methods of fan event would not be happening for the foreseeable future. We wanted to figure out how to fill that vacuum. What could we invent to really put the fans at the center of an experience that could be dynamic and meaningful to them?

Senior leaders across the business engaged with as many marketing employees as they could find across every division of the company that drew from DC — film, TV, video games, comic books and consumer marketing — to come up with a way of recreating a fan event on a virtual stage.

The team quickly resolved to make the event global, broadcasting in nine languages — English, Spanish, Traditional Chinese, Japanese, Korean, Portuguese, French, German and Italian — and streaming over 24 hours to allow all audiences a chance to watch the content at a suitable time. They decided they needed to make the event as visually dynamic as possible. What we ended up with was a 3D virtual Hall of Heroes stage designed by DC Chief Creative Officer and DC legend, Jim Lee. This became part 1 of DC FanDome, named “Hall of Heroes”.

The first event was a real success and created a buzz! What can fans expect for the second event?

We really wanted to put together an event that would super-serve the fans, and it did. In fact, we have a second part to the DC FanDome experience “Explore the Multiverse” debuting on Sept. 12 (Sept 13 AEST) This will be an on-demand event, with all panels and programming going live at once, allowing viewers to curate their own experience over another 24-hour period. With the huge success of Part 1 “Hall of Heroes”, this “Explore the Multiverse” Part 2 is sure to be equally as special.

It is crazy to think that content of this quality has been offered for free! And it seems super-popular with a really positive response across social.

Correct. There is no way a physical event could have matched DC FanDome’s Global scope and breadth of talent. I love that we reached a lot of fans around the world that we wouldn’t normally be able to reach. We were able to have questions from India answered, or artwork looked at from the Philippines or South Africa by the talent.

On the Social side, I can tell you that the social sentiment was outstandingly positive. Total worldwide social conversation volume reached millions of posts and the commitment to making content accessible for fans around the world paid off, with DC FanDome and related DC brands trending in 53 countries on Twitter and 82 countries on YouTube.

So Andrew, what’s your favourite segment of the DC FanDome?

Well, I did enjoy Lynda Carter’s surprise appearance on the Wonder Woman panel and The Rock (perfect casting by the way) introducing the Black Adam movie. In addition, and perhaps not a favourite segment but my favourite aspect of DC FanDome was DC’s commitment to diverse storytelling; demonstrated by the Bawse panel, the relaunch of Milestone Comics, the news that a Static Shock film is in development, John Ridley’s announcement about the new Batman series, as well as the diverse cast in Black Adam and The Batman, was met with praise by myself, fans and press.

And you knew this question was coming… who is your favourite DC character?

Great question and not easy to answer with such a breadth of DC Super Heroes and Super-Villains. I know you’re a massive Joker fan Tony, but I’d have to say Superman. You can’t pass on his strength, speed, ability to fly, love of humanity – and it may also be the Clark Kent part: the idea that all of us are so plain, so ordinary but when there’s moments that count – we want to rip open our shirts and do something better for this world. Haven’t we seen this exhibited in 2020 of all years?

I can imagine how awesome a physical version of the FanDome would be as well… almost like a theme park. What do you think?

Yes, it would be very cool. Perhaps a cross between DC’s Hall of Justice and Avatar’s Pandora right?

With over 22 million viewers in the 24 hours of the first FanDome, can we expect more releases like this from DC in the future?

I think so. WarnerMedia is leaning in to Digital and Direct to Consumer like never before… watch this space.