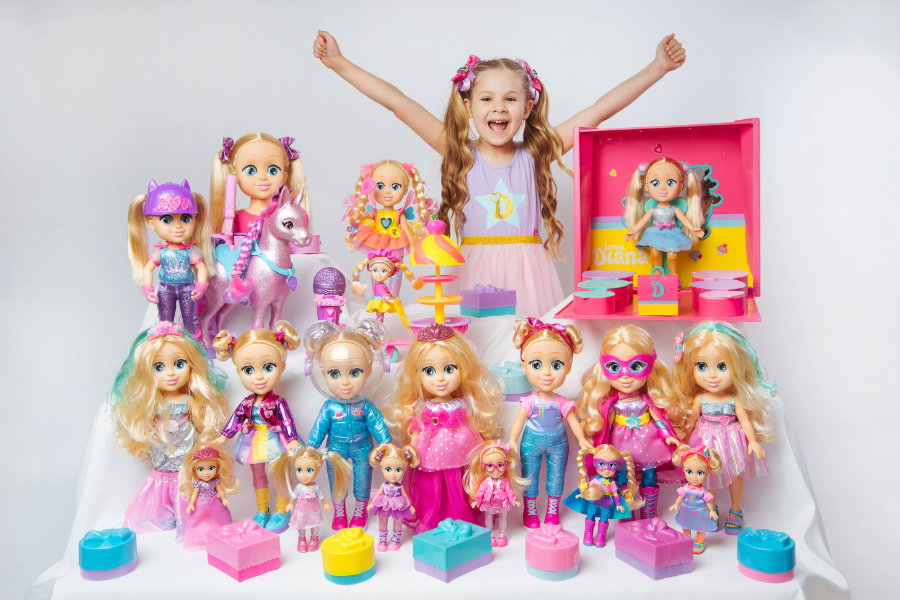 YouTube was founded back in 2005 and now, 15 years later, the service offers content creators a platform to build a business creating original content that is instantly accessible to over 2 billion users worldwide. Along with this trend towards dedicated channels for content creators of all sorts, the kids genre has become especially popular with a range of great options available to YouTube subscribers all around the world.

One of these channels is Kids Diana Show which has over 154 million subscribers globally, as of 9th November 2020 and is the number two YouTube channel in the world. In September alone Love, Diana had over 5 billion views globally and, more specifically, almost 40 million views in Australia and New Zealand where the brand is represented by global licensing agency Centa IP. In December 2019, Kids Diana Show signed a deal with California-based digital media studio pocket.watch to create “Love, Diana — The Princess of Play,” a new brand built around Diana, which encompasses a new original series, “Dress-up” mobile-game and a comprehensive consumer products line, including toys and apparel which have just launched in Australian stores from this October.

Diana, a six-year-old Ukrainian-born girl takes viewers on playful adventures bursting with colour and imagination, with her brother Roma and parents Olena and Volodymyr along for the journey. Fans of the Kids Diana Show channels are seeing the new “Love, Diana” brand come to life, with elements of it woven naturally into the core Kids Diana Show channel, creating a more diverse video experience. Diana believes that play can be found everywhere, especially through imaginative stories, creativity and fun-filled adventures. With a focus on imagination, playfulness, creativity, empowerment and friendship, the brand lends itself perfectly towards consumer products such as toys and apparel and we are just now seeing some of these come to life.

Back in December of 2019, pocket.watch were looking for a partner in the category of dolls for global distribution, and with the help of Centa IP, discussions began with Australian-based toy company, HeadStart International. It is no secret that Australia has become a genuine player in the global marketplace with Moose Toys and HeadStart International both enjoying great success with Shopkins and Ooshies respectively over the past few years. HeadStart was so excited by the opportunity to become the global manufacturing and distribution partner for Love, Diana in the doll category, that a deal was finalised in March of 2020 just before the world went into lockdown.

“I am aware that every big Australian toy company became global by identifying a property they loved and believed in, and then committed to making that property a global success. That property for HeadStart is Diana.”

What followed was an extraordinary effort by the HeadStart team to develop and manufacture a range of Love, Diana dolls in just seven months, a feat made even more impressive given the challenges that global supply-chains have faced in 2020 since March.

“We are so excited about our range of Love, Diana dolls which are absolutely flying off the shelf since launching in Australia just a few weeks back. We launched day and date with every major retailer and all buyers are thrilled with the result!”

The range that HeadStart launched in November across Australia and New Zealand, and exclusively with Walmart in the USA and Smyths in the UK, is world-class and the sales to-date reflect this. Product shipped in late October in Australia across major, independent and online retailers, including Big W, Kmart, Target, Kidstuff, Mr Toys, Catch and Kmart while Farmers and The Warehouse launched the product in New Zealand.

“BIG W is excited to welcome the Love, Diana products to our extensive toy offering, including the Love, Diana Horse Set Feature Doll Pack which is exclusive to our stores. Sales at launch have been really strong within the fashion doll category, and we’re sure Love, Diana toys will top the wish lists for many kids this Christmas.”

The Love, Diana range includes many versions of the doll including Light Up Fairy doll, Mermaid Mashup doll, Pricess/Superhero doll, Mini dolls and Astronaut doll across various price points. The product has been in-store for over two weeks now and the sales have been fantastic.

“We are so proud of HeadStart. We have been involved with them and pocket.watch since day one for Love, Diana. We have seen them develop a world class range of dolls and accessories which they have delivered globally within a very tight time frame. It is exciting to see our local Diana followers love the HeadStart dolls as much as we do. Sales have been way beyond our expectations from the moment we hit the stores.”